Print’s Dead and Digital Killed It

Print’s Dead and Digital Killed It 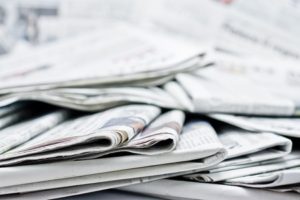 At least, that’s what we’re led to believe. The way it’s broadcast nowadays, Print is the Manny Pacquiao to Digital’s Floyd Mayweather. It’s receiving a sound beating on an international stage as everyone screams for more.

We’ll admit, we believed the trend, too. It’s why we were so skeptical when new client Health Transitions Clinic approached us with heart set on running a newspaper advertisement. To promote their medically-supervised weight loss program, they held free information sessions for the public… and they wanted to reach them in black-and-white.

We tried to nudge them in a different direction. Print media seems a bit antiquated in the world of digital, right? We tossed around the idea of a nice social media campaign, maybe a radio spot or two. They stood firm. We shrugged and built three-page dominant newspaper ads. Three testimonies from clients filled three sequential right-hand pages of the Sunday Gazette. If we were going to go print, we were going to go big.

The day came, and we prepped HTC for the turnout. Our fingers were crossed for maybe a dozen attendees. Fifteen if we felt really lucky. Neither of us knew what to think when 150 people filed through the door. In fact, it was so popular that they had to turn away some thirty requests and defer them to a later date. 150 people responded to the newspaper ad, and 150 people made us reconsider the impact print media still has in a digital world.

We were pleasantly surprised, to say the least. But why the surprise? After all, direct mail still has 43 percent of total shares in local advertising. And when it comes to making purchasing decisions, 92 percent of young shoppers prefer direct mail. Sure, digital is exciting. It’s flashy, it’s booming, it’s dead helpful. We incorporate it into client marketing strategies in a number of ways. However, it hasn’t squeezed print media out of the mix entirely.

Print’s not dead. It’s been thrown in the ring against heavyweight Digital Media, but its’ not dead. It’s just taking a quick breather in the corner, mopping sweat and lacing its gloves for another round to go down swinging.