October 14, 2012 by J.W.Morton in Company Announcements 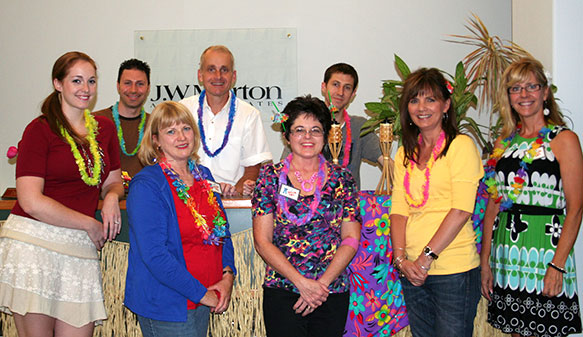 We recently met with the executive committee of Corridor Goes Casual for Kids (CGCK) – Paul Phelan, Joannie Bruns and Larry Crain – to review the results of this year’s event. On August 31, for the second year in a row, CGCK gave business people throughout the Corridor the chance to dress casual, pay $5 for the privilege, and raise money for the local children’s charity of their choice. There is no central agency and no overhead, so 100% of the money goes directly to charity. Companies are encouraged to have fun and put their own spin on the event. At JWM, we adopted a Hawaiian theme. Kim McGuire, our office manager, even brought grass skirts. These ended up being worn by our reception counter rather than our bosses (heavy sigh of relief).

Earlier this year, the CGCK committee approached JWM about handling public relations. Although they made great strides their inaugural year, they were looking for help in spreading the word and growing the event. We were happy to oblige. Our efforts captured media coverage of this year’s kick-off at Vets Memorial Stadium, a guest editorial in The Gazette and Corridor Business Journal and numerous radio interviews.

The number of participating businesses increased from 140 last year to 160 this year. It will be several months before we know the dollar amount generated during this one-day fundraiser. Regardless of the final total, we know the event was a success. After all, we are making a difference in the lives of children. That’s priceless no matter how much is raised.