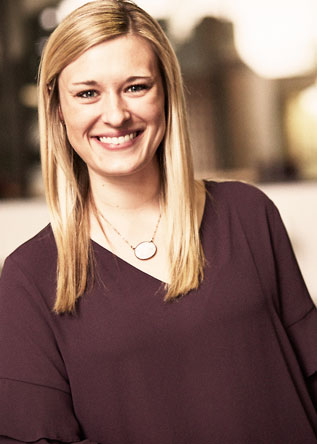 The first and most important thing you need to know about Kali – her name rhymes with daily. It does not rhyme with alley. Yes, she knows it’s confusing. No, she’s not sure what her parents were thinking.

As the oldest of four, Kali is used to taking on new challenges and figuring things out on the fly. It’s what allowed her to flourish while moving between three different school districts growing up and it’s what pushed her to leave Cedar Rapids, where she was born and raised, and head south to Texas where she earned her degree in advertising and public relations at Abilene Christian University.

After graduating early from ACU, Kali set her sights on law school back in the Midwest. Kali loved learning and school was all she’d ever known. But she soon found she also liked having a job. Actually, several jobs. You may recognize her as your barista at Starbucks or your server at Texas Roadhouse. She realized the pull to establish herself and start a career was stronger than the pull back to school so she decided against going back. Law school was off the table (for the time being).

This change of course led her into the world of marketing and advertising, where both her logical and creative sides were put to good use. She started out in a local marketing job for a national restaurant chain and later became an account manager for a recruitment advertising agency based in New York.

Both gigs utilized her people skills and talent for organization to build strong client relationships and keep every project on track. She likes the fast-paced atmosphere of an agency and relishes doing something different every day.

Kali is passionate about solving problems and helping businesses put their best foot forward. We’re happy to have her on board to put that passion to work for our clients.