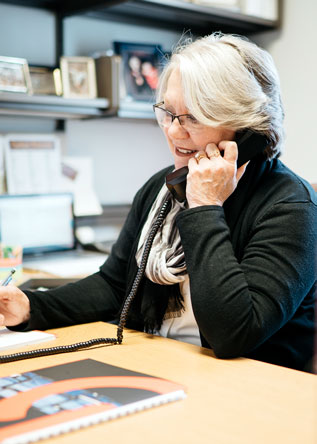 A twenty-five year veteran of the media buying business, Patty Kisner knows a thing or two about advertising. She’s worked at a variety of agencies across the state, from HRB to CMF&Z to Meyocks, but her goal has always been the same – to get her clients’ message in front of the right audience at the right time, every time.

Growing up in Kansas City, Patty loved watching TV. Leave It To Beaver, The Andy Griffith Show, Wonderful World of Disney – she couldn’t get enough. But it wasn’t just the shows that she liked, it was the commercials too. “Why do I see commercials for cereal when I watch my shows but Dad sees commercials for cars when he watches his shows,” thought young Patty.

It’s a question that stuck with her through college at the University of Central Missouri and into her first advertising adventure as an office coordinator at LaCombe/Kucera in Cedar Rapids. The front desk was a great vantage point for a business major to learn the ropes in the advertising industry and she soon found herself placing media on top of her regular duties.

Her husband’s job as an agent for the Iowa Department of Criminal Investigations moved them around the state and Patty tried out different jobs in retail and finance. But after getting a taste for media buying, she wanted more and eventually found her way into the advertising industry.

The way Patty describes it, media buying is both an art and a science. For example, when she saw promos for the first season of Friends at a presentation from the local NBC affiliate, she knew it was going to be huge. She needed to get her clients booked during the show but she didn’t have any ratings or data to defend her decision.

Spoiler: Patty’s psychic abilities are finely tuned. Friends was a top ten primetime network show for each of its ten seasons and averaged 23.6 million viewers. She had the same feeling the first time she saw ER and The Voice and was right again on both counts. Media buyers have to combine things they believe without proof with things they can measure. It’s a tricky intersection to navigate but Patty knows the map like the back of her hand.

We’re excited to welcome Patty to the J.W.Morton team. To learn more, check out her bio.