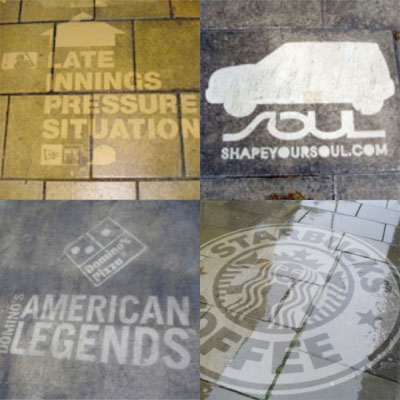 Looking for a low-cost alternative to a traditional billboard campaign? Always wanted to try some guerilla marketing but didn’t know the right tactic for your product? Check out reverse graffiti. It’s eco-friendly, clean, unique, and if used correctly, might just be your next powerful marketing tool…

You may ask, “What the heck is reverse graffiti?” Great question! Reverse graffiti is really very simple. Using a stencil and a pressure washer, your logo, promo, or whatever message you would like, is washed into the dirty pavement. The result? A simple, clean ad that, if properly placed, has the potential to reach hundreds or even thousands of people over its lifetime. (A lifetime, which of course, will vary depending on the weather.)

Reverse graffiti is catching the attention of major advertisers. A recent article from the New York Times highlights a few marketing firms that specialize in street marketing, who have put together campaigns for companies such as Dominos, Starbucks, MTV, and even the European Union. In the article, Jim Bowes, founder of GreenGraffiti, says, “The city is our canvas. We can tell a story over the course of two blocks if we want to, without paper, without ink”.

There are other forms of street advertising besides reverse graffiti. Chalk advertising is one. Chalk advertising is exactly what it sounds like. Chalk is put to the pavement to create eye-catching 3D advertisements that are hard to miss. Painting can also be done on sidewalks and buildings. Keep in mind the differences between painting or putting chalk on a sidewalk and blasting away dirt and grim, which is what reverse graffiti does. Painting and chalk may seem more invasive, even though both can be washed away. Reverse graffiti works with what is already there.

You may be questioning the legality of reverse graffiti and other forms of street advertising, and this is indeed a worthwhile concern, as some street advertising has come with costs.  An article in the Washington Post describes how Verizon Wireless was fined for putting chalk advertisements on the streets of Washington D.C. because a permit was not obtained first. This article talks about a community organization that went around New York City and whitewashed street-level billboards that had been put on buildings, in order to take back their public space that’s already cluttered with advertising. Although 3D chalk advertising and reverse graffiti may be great tactics for your campaign, you should be sure to first check with the city where you plan to put your ads so that any fines are avoided.

Reverse graffiti is great for many reasons. For one, it’s eco- friendly. Although it takes large amounts of water to spray down the pavement, it is still “about 30 times less than is needed to produce a paper poster of comparable size”, and once the ad has washed away, it’s gone forever, leaving behind no waste. It’s also likely to generate some buzz, as it’s a unique, non-traditional form of advertising that you most likely do not see every day.