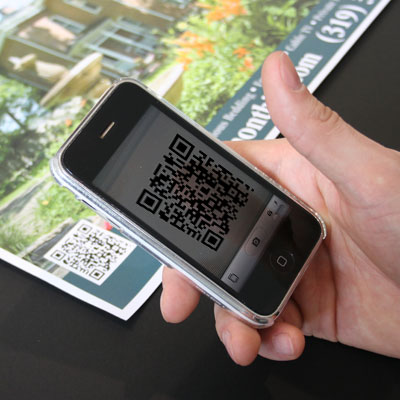 Barcodes. What’s so cool about barcodes? Well, when you’ve found a new, intriguing use for them as an advertising tool, they have the potential to be very cool. In particular, we’re talking about QR codes. “QR” stands for “quick response”.
A QR code is a specific type of two-dimensional code that has been designed to be readable by QR barcode readers, which can be found on your smartphone by downloading a QR reader app.

Here are the basics: See a QR code, scan with phone, be taken to a destination.

QR codes have many uses. One of their biggest uses is to simply allow people to get further information, such as information about a product, business, or even a person. Don’t have the budget for a big ad? A QR code could easily fit a smaller ad and potentially give the person who scans it much more information than they could have ever gathered from a full-page ad. Example: Let’s say you’re a wedding photographer. You could take out a smaller ad in your local newspaper and simply put your picture, title, and business and add a QR code. The QR code could be made to take a person straight to your website where they find out all your contact info, portfolio, etc., and it’s savable right on their phone.

QR codes have other uses other than linking someone straight to a URL. They can also be made to give phone numbers, email addresses, SMS, or even act as a coupon that can be scanned directly from your smartphone. They are great because they are easily generated and can be placed on billboards or virtually any print medium.

The trick is the technology adoption cycle. QR codes were initially created in Japan and are used much more overseas. Not everyone will understand what to do when they see a QR code and still a small percentage of people in the US have a smartphone. However, QR codes are popping up in the US. Here in our own Cedar Rapids, a local businessperson placed a QR code on a billboard.

In advertising the possibilities really are endless. How are you standing out from the crowd?