What Twitter and Google’s Partnership Means for Search Results

What Twitter and Google’s Partnership Means for Search Results 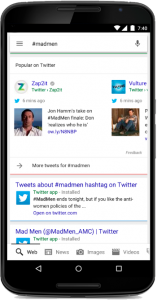 Social and search collided last fall after Twitter announced a partnership with Google. Available only in the US and on mobile devices and desktops, posts from the Twitter “firehose” – a stream of 9,000 Tweets posted each second – will be indexed, archived, and available for view as you Google search.

Basically: if search and social smashed into each other at warp speed, this Twoogle (Gwitter? Twiggle? #ugh) mash-up would be the result.

As of now, only Tweets from big name brands and celebrities pop up on the search engine. Lucky us, we’ve got a little more time to map out what this means for business – but just a little. Twitter is nothing if not “RIGHT NOW!!” media, so they’re bound to expect the same zippy response from its users. As we say here around the office: “Adapt or die.”

Our pros and cons of the new frontier: